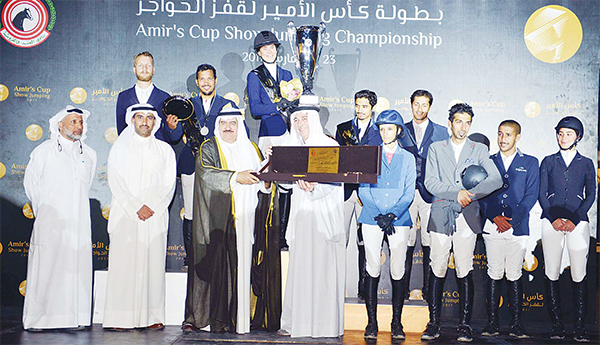 KUWAIT CITY, March 26: His Highness the Amir Cup Show Jumping Championship concluded on Saturday with Noura Al-Qaoud winning the championship title on the final day of the three-day event which took place at the Hunting and Equestrian Club. The competition consisted of 14 various horse jumping rounds for various age groups.

The grand prize went to Al-Qaoud after she managed to jump 140 cm in the final round, which involved eight other competitors who had achieved the best scores in the preliminary rounds. Abdulrahman Al-Fuzeai took second place, and Rakan Al-Hassawi took third place.

In a press statement, Capital Governor Thabet Al-Muhanna expressed his honor concerning the patronage of His Highness the Amir of Kuwait Sheikh Sabah Al-Ahmad Al-Jaber Al-Sabah for this championship, which has been revived after it was suspended 20 years ago. He stressed that this can be considered as an achievement for the Hunting and Equestrian Club. In the 115-cm category for teams, the team consisting of Ahmad Al-Anaz, Abdulrahman Al-Fuzeai and Abdullah Al-Awadhi came first, followed by the team consisting of Latifa Al-Hajri, Ghanima Al-Marzouq and Lulwa Al-Essa in second place, and the team consisting of Anaz Al-Anaz, Dafni Helaits and Jamila Al-Mutawa in third place.

In the amateur Under-14 competition, Zeina Al-Nafeesi came first followed by Abdulrahman Al-Awadhi in second place, and Suhaib Al-Mutawa in third place. Minister of Commerce and Industry and State Minister for Youth Affairs Khaled Al-Roudhan was present at the event along with the Deputy Director General of Public Authority for Sports Dr Hamoud Fuleiteh, and Head of the Hunting and Equestrian Club Masoud Hayat among other officials.