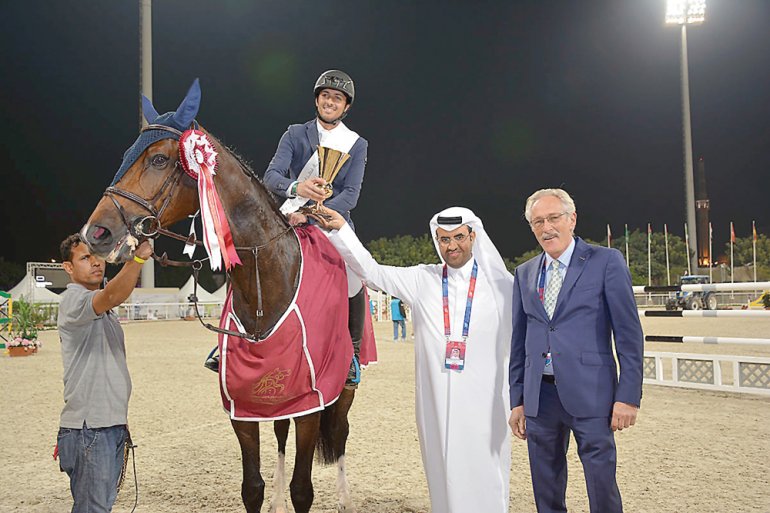 Al Khorafi, who finished with a win in one of the competitions on Friday, claimed his win ahead of Jordanian rider Ibrahim Hani Bisharat, astride Brown Sugar and Russia's Vladimir Tuganov, who rode Confident Of Victory.

Brown Sugar clocked a time of 46.02 seconds to secure the second spot while Confident Of Victory finished in a time of 48.64 seconds for the third spot among 10 horses which qualified for the final round.

Al Khorafi, 27, was thrilled with his 'dramatic win'.

"It's a pleasure to win this event since it is our first show of the season," Al Khorafi said. "A lot of strong riders here. Most of the competitors here are Olympic riders. The competition standard is very high. I had to take the risk since I was the last jumper. My mare has been doing really well. It did a great job on the first two days. I said 'I will try and take the risk," Al Khorafi said.

"Unfortunately we are not riding under the Kuwaiti flag. Hopefully they will fix the problem and we can ride (under the flag) in the next show," he said.

"This is my second year with this horse. She's young. She has done well. Hopefully I will take her to a higher level," he said.

"I have won here (on Friday) and finished second (on day one). Hopefully we will do a great job next week (at the Al Rayyan Show Jumping Championship)," he said with a smile.

Rashid Al Marri, another Qatari rider, finished in second spot with Beyonce, who ended with a best time of 61.08 seconds. Al Marri got richer by QR 8,000.

American rider Reed Kessler was in the saddle as Cos I Can secured the third spot in a time of 65.72 seconds. Kessler won QR 40,500.