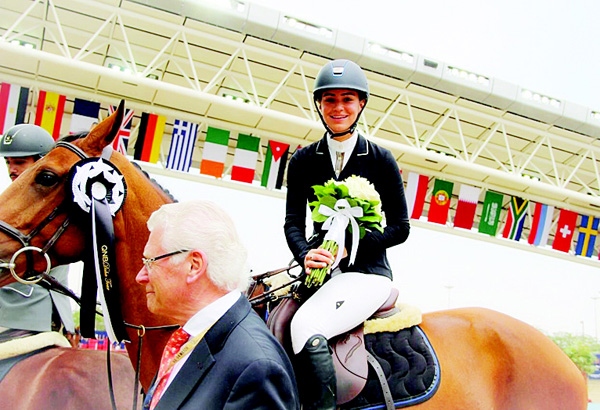 Aisha Al-Qaoud after finishing 5th Kuwait’s equestrians have made advanced positions at the fifth edition of CHI Al Shaqab in Qatar.

Ali Al-Kharafi won the gold medal in the category 135cm, ending the jumping round in a time of 60.22 seconds, while Latifa Al-Othman was granted the silver medal for the second position.

In the same competition, Kuwait’s Rakan Al-Hassawi won the fourth position at 62.34 seconds, while his compatriot Aisha Al-Qaoud ranked fifth with 65.44 seconds.

During yesterday’s contest, Al-Kharafi won the first place in the category 145cm in a time of 56.88 seconds. (KUNA)

The event includes 160 of the World’s top riders from Arab, Gulf and European countries. The three-day event sees the riders compete in Jumping, Dressage, and Para-Dressage. President of Qatar Olympic Committee (QOC) Sheikh Joaan bin Hamad Al-Thani expressed delight at being able to welcome some of the world’s top riders to the event. (KUNA)