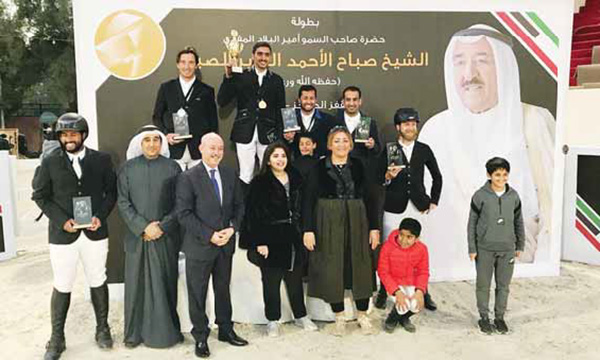 On the second day of His Highness the Amir Cup Showjumping Championship, which is taking place at the Hunting and Equestrian Club, impressive performances of Kuwaiti jockeys Rakan Al-Hassawi, Abdullah Al-Gharbarli, Salman Al-Twinaan and Abdulrahman Al-Awadhi were witnessed.

According to a press release, Rakan Al-Hassawi came first in the category of 140cm jump on Friday, Al-Gharbarli topped in the 130cm jump, and Al-Twinaan and Al-Awadhi won the 110cm jump and 120cm jump respectively.

The organizing committee organized a special round of 80cm and 90cm jumps for amateurs. During this round, 36 of 100 horse riders managed to complete the jumps.

The three-day event has been witnessing the participation of nearly 300 equestrians, both local and foreign, who compete in the biggest championship in the current sports season in terms of the total value of cash awards, which hit KD 50,000 (nearly $164,000).